I just wrapped up this animated TV commercial for a financial client. All items except the audio and the 3 stock photos in the middle of the spot were created at my studio. Most of the ballons are the same ballon with the colors altered in After Effects. I then mirrored or flipped them with some extra key frame movements to give each one it’s own personality. The noise makers had the same treatment. While this spot went to the northern Wisconsin and Minnesota markets, I also do freelance animation work for the Milwaukee and Chicago television markets. You can read more about the spot under the Digital Animation section of this blog. I also have a few more samples posted at http://www.youtube.com/user/StudioN51?feature=mhee .

This is an animated commercial I did for the 2013 Auto Show Gala put on by ADAMM. If you’re interested in some of the details, I’ve posted additional information under the Digital Animation page.

I just completed this freelance TV animation project for an ad agency in Wisconsin. This is a reworked spot from one I did a few years ago. The motion graphics animation was originally done in SD – standard definition – so I needed to update any footage used and reformat for HD – high definition broadcast. The beach footage and the remodeling image were purchased stock items while the rest I created from scratch. It was a little hard to look through hundreds of beach video clips when I was sitting in a snow covered farmhouse studio. I used a clip that provided a nice warm sunset tone to contrast with the cooler snow colors within the spot. In the original TV animation, I had a couple envelopes with the words “bills” on them but it looked a little like cheap clipart. For the new TV commercial, I created a couple 3d ornaments with some cash skin wraps and had them consolidate into the 2 main ornaments. While the VO was pretty quick, I wanted to show a visual that conveyed a winter vacation. The 3d beach ball animation I created fit well. It bounces in at the “vacation” mark and leaves just in time to reveal the remodeling image. If time allows, I usually like to drop something in at the end that maintains the flavor of the spot. The beach ball was small enough and with a little snow, the spot wraps up nicely. I also added a couple small sound effects for the 3d beach ball I created and the loan super. The rest of the audio and VO was supplied by the ad agency. 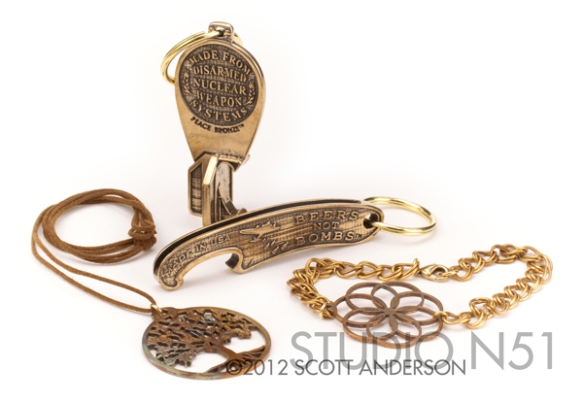 This is a product photo of items produced from disarmed and recycled nuclear weapon systems. Photo taken 12/8/12

The group product shot was for BrightandBold.com. The product line is made from a unique copper alloy created from disarmed and recycled nuclear weapon systems. Bottle openers and jewelry make up this group shot. One of the more unique freelance web product photos I’ve done. The company deems the products are safe to handle but it was still a little odd to handle items that were once a part of a nuclear weapon.

Just starting to research a new animation project that will show how a carpal tunnel procedure relieves pressure on the median nerve in the wrist. During my high school football video shoot last night, I was able to get some great source material information from the team doctors. Should be an interesting project.